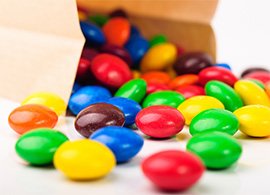 We’ve all been victims of advertising at some point in our lives. Think about it; you decide to go on a healthy eating kick and cut the sugar in your diet, only to head to the supermarket and see your favourite treats all lined up at the checkout. You made an extra special effort to skip the sweet aisle but you still can’t escape those sweet treats! However, recent actions by supermarket stores have shown that changes may be on their way. This week, yet another high street chain has decided to ban sweets from its checkouts amid pressure from campaigners. The question is: will this be enough to prevent sugar overload and look after our children’s oral health?

The retailer in question has joined a number of other retailers to promise to reduce the visibility of chocolate and sweets in their store. The changes will be coming into place by April this year and has come after pressure from campaigners claiming the ‘guilt aisles’ fuel obesity. It’s the latest chain to impose the ban – following supermarkets such as Tesco, Lidl, Aldi, and a pledge from Morrisons.

This poses an interesting question and possible debate on whether or not making sweets less visible will help to improve the diets, general, and oral health of children.

As well as continuing campaigns to reduce visibility in stores, there has been a huge improvement in the Government’s attitudes towards sugar consumption. Already, the NHS has introduced a 20% tax on sugary drinks in all its shops and cafes. What’s more, a sugar tax was introduced in the recent budget, seeing an increase in the cost of sugary drinks. There have also been further calls to introduce a ban on certain offers, such as buy one get one free on sweets and sugary products.

Will it work: The debate

There’s no doubt about it, decreased visibility of sugary sweets in stores means that children are less likely to see them and be tempted. This is particularly true of young children, who won’t be wondering about supermarkets by themselves. Parents may also be less tempted to buy them on impulse and won’t be nagged by their little one’s that have been tempted at the tills. Over time, it’s likely that we’ll change our habits too.

However, teenagers will still be able to get their hands on chocolates and treats stocked elsewhere in the store. There will still be an aisle dedicated to these types of products. Sugary tweets will also be more visible in smaller shops such as corner shops and off licenses – making the temptation to tuck in still very real.

For more information on the impact of sugar on oral health, read this blog post – which goes into detail on the matter. You can also book an appointment at AP Smilecare to get your teeth checked over and get some advice on oral health from the experts.

What are your opinions on this topic? Would you still go out of your way to head to the sweet aisle? Tell us in the comments below or tweet us @APSmilecare

← Sugar-free gum… something to chew over Could sensitivity be telling you something? →